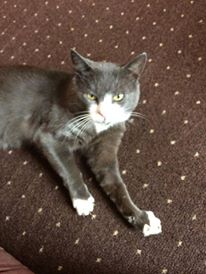 This is one little chap who stole our hearts. King George was FIV positive after being attacked on the streets by all the other street cats – he never defended himself.

Battered and dumped on the streets. He has been cruelly treated. He was seen regularly being physically slung onto the streets by his ‘human parents’ and locked out when they went on holidays, neighbours fed him and he lived in a bin in a garden most of the time wanting love and food from his supposed human parents, then they moved and dumped him.

He was saved by Ella at Stokey, who asked us to take him. He was shy at first but is a truly gentle and special little chap – glad of anything at all.

It took me a week to persuade him that he was allowed to use his cat bed and not just sleep on the floor – he used to jump out of it cowering in the corner when I went into his room and he was in it. He seemed to think we would punish him for being comfortable. He ate himself sick the first few days until he realised food was always going to be available.

We had to gently treat him and just let him come around in his own time.

He did and just a month or so later, he was eating and using his bed. He was riddled with worms and fleas too which are now cleared. .

Another few weeks in foster as well, so with us months by then – and he found a home with Kate! Lucky King G and you can see him settled already within a day!