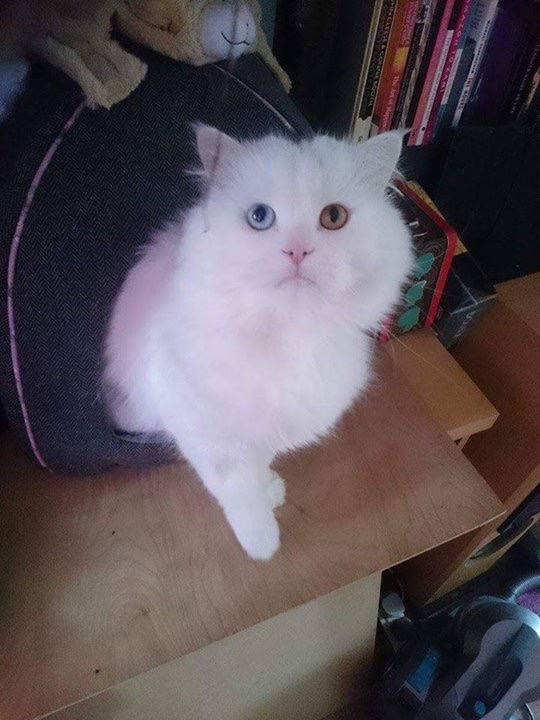 BOWIE adopted by the lovely Holly but he was saved by a lovely person in the Middle East. He needed to be a cat in a home with maybe one or two other cats and no dogs. Lady loved him enough to send him to UK to get that. He didnt settle in his first home, rehomed with a cat who came as a spayed girl in his group who he got on with while travelling and in our home, unfortunately, we realised a few weeks later why – she was not spayed as marked on her details -) and came into heat – poor Bowie was only responded to her calls and so it all looked wrong on rehome for a mild boy who never reacted! I wish we had known and the adopted mom who was baffled and had to return Bowie as we thought he had reacted to being with another cat ! We checked many after that, but even this year with an another overseas origin – cat, we had another come as a neutered boy and was an unspayed girl – luckiy that one was rehomed as an only cat – so less complicated and didnt mean a poor unsuspecting boy cat lost its home. Young male cats even neutered may well react to girl cats on call.

Bowie wanted me to show you how loved and cosy he has been since leaving Strawberry. He said he is lucky enough to have a nanny and 2 mummys to fuss him all day. He is allowed to go anywhere in our home but his favourite place is his Mummys bed as it has so many cosy blankets. He eats, sleeps, plays, and cuddles all in the best of ways. He is our little bundle of joy and the most loved animal we have ever had. He has his insurance now, but hopefully it won’t be needed, not many accidents can happen snuggled up in soft cushions! Hello to everybody at Strawberry we hope you are all well, kitties and humans. Xxx

Always good to have insurance, for any worries!

Bowie since rehome worried his mom when he started going bald on his nose (I hope we helped when she phoned us) and we tried to help and luckily, all seems ok with that now.

She contacted us today, as his bloods show slight renal changes – so renal diet as we know with lower protein helps – so senior food from good quality providers. We are happy to help if you need us, but we are not vets – we can maybe suggest more questions to ask a vet, but only a vet can diagnose problems.

They are awaiting more results but it does show mild kidney disease.